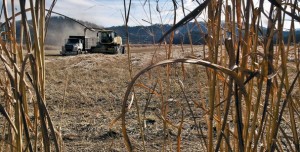 Van Shaver had never considered a career in farming until switchgrass came along.

One of the first 16 farmers to plant switchgrass under contract with Genera Energy in 2008 as part of a state-funded bioenergy initiative, the home maintenance contractor and Loudon County school board member now has 90 acres under cultivation on his wife’s family farm.

“Row cropping is what most people do in our area, and at the time the farm had really dwindled down to where there wasn’t really enough acreage to make that a profitable option,” Shaver said. “I just decided to come in and clean the farm up and turn it into a working operation.”

If and when a commercial biofuel facility comes to the region – DuPont Danisco Cellulosic Ethanol has indicated plans to build a 25 million- to 50 million-gallon ethanol production plant in the state this year – many more East Tennesseans will need to get in the switchgrass business.

Shaver is one of 61 farmers breaking new ground in biofuels. Sprinkled across 10 East Tennessee counties, they have transformed more than 5,100 acres of East Tennessee crop- and pastureland into switchgrass fields. The crop will ultimately become feedstock for a pilot biorefinery, located in Vonore and built by Genera, a private company set up by the state to help launch a biofuels industry in Tennessee. The plant is operated by DuPont Danisco, which is to begin testing its process for making ethanol from switchgrass sometime this quarter.

For Shaver, the bioenergy crop represents a new income stream. For other producers, already farmers either on a part-time or full-time basis, switchgrass is supplementing or replacing other sources of revenue, from hay to beef cattle to soybeans.

The up-front investment varies. Although he had available land, Shaver bought the tractors, mowing machines and balers he needed to tend and harvest the crop, an investment of about $110,000. He now spends upwards of half his working hours on the farm.

“It’s certainly not a weekend thing, it’s a commitment,” he said.

For Randall Peters, who manages a 1,100-acre farm full-time with his father, Dwayne, in Monroe County, getting into switchgrass added no costs. The Peterses raise heifers for a dairy in Florida, their primary source of income, and grow soybeans, wheat and corn. Peters planted 225 acres in switchgrass as a way to rest marginal row cropland and diversify the operation, he said.

The good thing about switchgrass, Peters said, is the incentive contracts have provided a per-acre price, negating the typical risk involved with a new planting – particularly one that takes three years to reach full production. In addition, he said, the switchgrass has shown itself consistently productive even during drought – and it doesn’t require the pesticides or amount of fertilizer needed to produce soybeans.

The price of soybeans was high this year, “but because of the drought we didn’t have any sale,” Peters said. On the other hand, the switchgrass has flourished, producing about 9 tons per acre.

Former row cropland like Peters’ is easiest to transition, but most any type of land can be converted with a little effort, said Jon Walton, who is with the University of Tennessee extension service, one of two switchgrass specialists who work with producers to establish the crop.

“We’ve put it on a lot of really poor, rough land,” Walton said. “You can expect on more marginal land it’s going to produce lower yields.”

Indeed, Shaver said the yield on his three-year-old switchgrass field is 6.5 tons per acre. However, because he planted the crop at the end of a severe drought in 2008, Shaver expects next year’s yield to be higher.

The first year is most difficult, as farmers work to eliminate weeds and nurse along the tender switchgrass plants.

“You put it out there, and you might get a stand and you might not,” said John Davis, a beef cattle producer and first-year switchgrass farmer. “You have to do a lot of spraying.”

The process typically involves putting down one to two coats of weed killer before planting the switchgrass in the spring. The seeds are sown in the untilled ground with a planter that farmers either own or can rent from a local co-op. As the crop sprouts, seedlings must be watched carefully for weed takeover, sometimes requiring another spray of herbicide or a turn with the bush-hog.

“To be successful you have to keep your eyes on every field,” Walton said. “You have to go see (the crop) at least every week and sometimes once every few days.”

There are a number of models for farming the land. Some farmers own all the acreage they farm, others lease most of the plots. Some have equipment, others have invested in or supplemented their existing machinery. These factors, coupled with differences in the quality of the land, make it difficult to pin a profit margin on switchgrass, although all farmers interviewed said the crop had been worth the gamble so far.

“There wasn’t much income in the beef business, and it’s probably twice as much income as renting (the land),” said Jerry Richards, a beef cattle farmer in Etowah who has 90 acres in switchgrass and saw yields of 7 tons per acre this year.

“I think (switchgrass is) going to offer opportunities for everybody from the 20-acre landowner to the 5,000-acre (owner),” said Sam Jackson, vice president of feedstock operations for Genera. But smaller, non-farming landowners will likely need to lease property to larger producers who own the necessary equipment, he said.

How future contracts are structured with a commercial biorefinery will be the deciding factor in determining whether farmers choose to expand or get in the business for the first time, Peters said.

“If the market was there and profitable compared to soybeans and other stuff, we’d probably replace all my soybeans with switchgrass,” he said.