London team drive to South Pole on a biofuel ‘ski’ 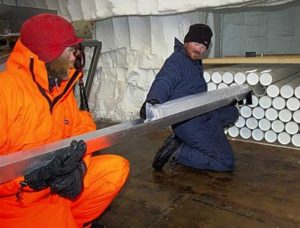 A vehicle dubbed a “microlight on skis” has become the first biofuel-powered vehicle to drive to the South Pole.

A spokeswoman for the Moon Regan Trans-Antarctic Expedition said: “The South Pole is a significant milestone and the team is delighted to be there.

As the team have journeyed over hundreds of miles of white, icy terrain, they’ve been amazed to hear about a snow-bound London.

“Temperatures are averaging minus 30 degrees in Antarctica and though the going has been slow at times, their vehicles are serving them very well indeed.”

The 10-man team contains four Londoners, including its science leader Ray Thompson, 50, from Imperial’s Institute of Biomedical Engineering. They will spend today at the South Pole before resuming their journey across the coldest, windiest place on earth.

The team set off last Friday from Union Glacier and hopes to be back there by Christmas. As well as studying the performance of biofuels they will collect samples of snow to test for trace metals, to track the passage of pollutants in the southern hemisphere. They will also be looking for potential meteorite samples in the ice.