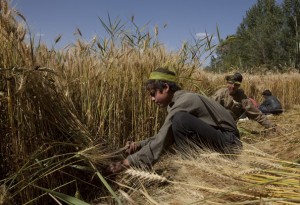 Syracuse University joins Arden-Foxs to advance the use of biofuels as an alternative energy source.  The effort involves entrepreneurs John Fox ’92 and Wayne Arden, who have proposed producing biodiesel in Afghanistan as a means to achieve multiple benefits, including reducing risks to American troops and building a new, sustainable economy in the country.

With energy demands growing at home bases along with many global deployments creating  logistical challenges, the Department of Defense (DOD) is working to increase the use of renewable energy to reduce dependence on fossil fuel resources and to achieve ‘net zero energy’ (NZE) throughout the military. The Arden-Fox report “Producing and Using Biodiesel in Afghanistan” analyzed latest off-the-shelf solutions that could be implemented to produce biodiesel in Afghanistan that will reduce casualties as well as create new industry for building a stable nation.

The creation of this new partnership will allow for piloting of the recommendations included in the report and documentation of the economical viability of the proposal.

The paper’s inspiration came from the commitment by President Obama to speed up the deployment of 30,000 troops to Afghanistan in 2009 and his announcement of the expected start of troop withdrawal from the country starting in July 2011.

“We recognize the extensive research and effort that has been put into developing these recommendations,” said Gina Lee-Glauser, vice president for research at Syracuse University.  “We believe that these recommendations have the potential to reduce U.S. casualties, and lessen the military’s dependence on petroleum. In the coming weeks, we will be partnering with John Fox and Wayne Arden to evaluate a parallel implementation at one or more U.S. military bases. The purpose of this partnership is to pilot the recommendations and document the economical viability of the proposal. This parallel implementation will help the DOD make further progress in making military bases in the U.S. Net Zero Installations.”

“SU faculty members have a broad spectrum of expertise that will help foster this partnership. For instance, understanding plant molecular biology holds the key to the development and sustainable harvesting of biodiesel crops, while innovative process design and integration are critical in achieving cost-effective production,” said Radhakrishna Sureshkumar, professor and department chair of biomedical and chemical engineering in SU’s L.C. Smith College of Engineering and Computer Science.

“Syracuse University’s expertise relating to biofuel science and engineering can make a significant contribution to the industry by advancing the state of the art of feedstock cultivation and production technology,” said John Fox, co-author of the report. “Their work is relevant to military bases in New York State and across the country.”

“The U.S. must increasingly turn to renewable energy sources to reduce our dependence on fossil fuels,” said Wayne Arden, co-author of the report. “Syracuse’s commitment to biofuel research and development is very encouraging, and could benefit the military both overseas and here at home.”

In the report, Arden and Fox highlight the five key benefits associated with producing and using biodiesel in Afghanistan:

* Reduce casualties – A significant percentage of U.S. casualties stem from protecting fuel convoys. The construction of a single, medium-sized biodiesel plant would reduce casualties by four to five soldiers per year.
* Free up troops for other assignments – By reducing the number of fuel convoys needed, an estimated 120 soldiers each year can be freed up for more critical assignments.
* Save money – The substitution of biodiesel produced locally in Afghanistan for the importing of expensive petroleum diesel has the potential to save millions or billions of dollars a year. Using $400 per gallon as the Fully Burdened Cost of Fuel (FBCF), a figure the DOD provided Congress in October 2009, the military would save $3.7 billion annually on fuel costs. However, even if the FBCF is only $41 per gallon, the plant has a one-year payback. In the second year of operation the plant would save $90 million and fuel would cost $33.50 per gallon.
* Challenge the opium trade – Reducing the influence of the opium trade is one of the most difficult challenges in Afghanistan. The biodiesel plant, allowing agricultural specialists to persuade farmers to switch from growing poppy to safflower, could reduce the cultivation of poppy up to 50 percent. This reduction would deny opium revenues to the Taliban, challenge criminal networks, and lower the incidence of corruption related to the drug trade.
* Create a new industry for Afghanistan – If the first plant is successful in supplying biodiesel to the U.S. military, other plants may be built, further stimulating agriculture in Afghanistan and creating jobs. These plants may be focused on the domestic fuel market, countering the drain that importing petroleum has on Afghanistan’s fragile economy. An export market is also possible since neighboring countries import large quantities of oil.

The report also recommends that United States Agency for International Development (USAID) fund a study to analyze the creation of an Afghanistan commodities exchange. A commodities exchange would bring greater visibility to Afghanistan biodiesel crops and more generally would strengthen the critical agricultural sector and Afghanistan’s nascent mining sector.

A full copy of the paper can be downloaded by visiting http://biodieselinafghanistan.org.