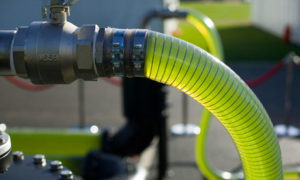 A machine producing biodiesel from algae, a fuel type used to successfully power a US gunboat for the first time. Photograph: Ashley Cooper/ Ashley Cooper/Corbis

It looked like a pretty ordinary day on the water at the US naval base in Norfolk, Virginia: a few short bursts of speed, a nice tail wind, some test manoeuvres against an enemy boat.

But the 49ft gunboat had algae-based fuel in the tank in a test hailed by the navy yesterday as a milestone in its creation of a new, energy-saving strike force.

The experimental boat, intended for use in rivers and marshes and eventually destined for oil installations in the Middle East, operated on a 50/50 mix of algae-based fuel and diesel. “It ran just fine,” said Rear Admiral Philip Cullom, who directs the navy’s sustainability division.

The tests, conducted on Friday, are part of a broader drive within the navy to run 50% of its fleet on a mix of renewable fuels and nuclear power by 2020. The navy currently meets about 16% of its energy and fuel needs from nuclear power, with the rest from conventional sources.

The navy plans to roll out its first green strike force, a group of about 10 ships, submarines and planes running on a mix of biofuels and nuclear power, in 2012, with deployment in the field scheduled for 2016.

The green trend runs across all military services. The air force has been testing jet engines on a mix of conventional fuels and camelina, a crop similar to flax, and the Marine Corps recently sent a company to Afghanistan’s Helmand province equipped with portable solar panels and solar chargers for their radio equipment.

Fuels made from algae oil burn more cleanly than fossil fuel, but preventing climate change is not a major factor in the Pentagon’s calculations. “Our programme to go green is about combat capability, first and foremost,” Cullom said. “We no longer want to be held hostage by one form of energy such as petroleum.”

Over the last year, the Pentagon has become increasingly vocal about the burden of running oil convoys in battle zones. Fossil fuel is the number one import to US troops in Afghanistan, and the slow and lumbering convoys of oil tankers are an obvious target for enemy combatants.

Fossil fuels are also horrendously expensive. By the time it reaches a war zone, the true cost of a gallon of petrol is well over $400.

In theory, biofuels can be produced wherever the raw materials are available, possibly even in the combat zone. However, Cullom admitted that, as of today, algae-based fuels are no bargain. The current cost of a gallon of algae-diesel mix is $424 a gallon. “Any time you are an early adopter, it’s not going to be $3 a gallon,” he said.

The early versions of algae-based fuels had a short shelf life, with the fuel separating in the tank, sprouting, or even corroding engines. “They had some not very good characteristics at the end of the day,” he admitted.

But the navy appears committed. Last month it placed an order for 150,000 gallons of algae-based fuel from a San Francisco firm.