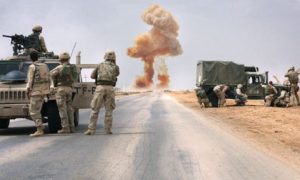 US Marines south of Baghdad in April 2003. The US military used an estimated 800,000 barrels a day during the conflict. Photograph: Wally Santana/AP

Fiscal reality is dawning as US jets and warships trial alternative fuels in bid to end military’s costly dependence on oil.

It’s a secret just how much oil the US military uses, but estimates range from around 400,000 barrels a day in peacetime – almost as much as Greece – to 800,000 barrels a day at the height of the Iraq war.This puts a single nation’s armed forces near Australia as an oil consumer and among the top 25 countries in the world today.

Either way it is by far the world’s largest single buyer of oil and the last thing any admiral, general or under secretary of defence has had to be been concerned about is whether there’s gas in the tanks or that the navy’s carbon emissions are a bit extravagant.

But there are signs of change. Every $10 rise in the price of oil costs the gas-guzzling US air force around an extra $600m each year. Just keeping one US soldier in Afghanistan with the world price of oil at $80 a barrel now costs hundreds of dollars a day in fuel alone. And because the US as a country imports more than $300bn worth of oil a year, fiscal reality is dawning. The US military spent around $8bn in 2004 on fuel, and probably twice that last year. Surging world fuel prices are likely to put the brakes on the US oil war machine as much as political opposition.

The military knows this. Earlier this year a Joint Operating Environment report from the US joint forces command predicted that global surplus oil production capacity could disappear within two years and there could be a shortfall of nearly 10m barrels a day by 2015.

“Peak oil”, said the generals, would impact massively on the US and other economies, and the US military would be compromised. Meanwhile Wesley Clark, former supreme allied commander in Europe, has argued strongly that America’s addiction to foreign oil is unsustainable and, by extension, the military’s $20bn a year spend on oil and other energymust be reconsidered.

The military answer has been to obey former President Bush and look to home. The navy’s decision to convert one ship to algae-based biofuelechoes a US Air Force plan to create a massive synthetic-fuel industry to provide the military with guaranteed, secure homegrown supplies. One idea is to turn America’s abundant supplies of coal and biofuel crops into liquid fuel, just as the Nazis did in Germany when its oil supplies were cut off during the second world war. Tests are now being conducted and the first of 6,000 navy jets are expected to fly with it next year.

Coal-based synthetic fuels, and biofuels – from both algae and crops such as corn – are now strong contenders to replace the fuels that the military uses to power its tanks and jet engines, says the Department of defence . But the search for more affordable, cleaner-burning alternative fuels is not driven by environmental concerns and there are massive drawbacks. Coal is not just one of the world’s prime drivers of man-made climate change, but also air pollution and acid rain.