Biofuel From Algae Could Compete With Oil 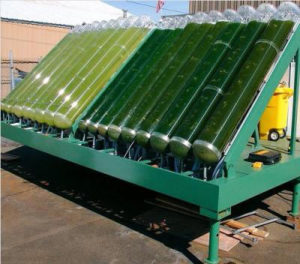 Biofuels made from algae can be produced in a way that make this energy source cost-competitive with crude oil by increasing the amount of energy algae stores as fat, according to early research from VG Energy, an alternative energy and agricultural biotech company.

Algae typically store energy as carbohydrates or fat. But a report (pdf) by biofuels expert John Sheehan suggests that techniques developed by the company to target tumors in humans could change that process — and in the process could increase algae oil output during the production of biofuels.

The resulting biodiesel and algae-based jet fuels could be produced at a cost of $94 per barrel, well below the current crude oil price of above $100 a barrel, according to the report by Viral Genetics, of which VG Energy is a subsidiary. Sheehan, a researcher with the Institute on the Environment at the University of Minnesota, is an advisor to Viral Genetics.

It’s all based on a technique developed by Viral Genetics researcher Dr. Karen Newell-Rogers. According to a report from Energy Boom, Newell-Rogers has been developing molecular techniques “to disrupt tumor metabolism to prevent them from burning fat reserves, making them more susceptible to chemotherapy and radiation.” The same switch could force the algae to store energy as fat, which could then be extracted as algal oil.

Biofuel researchers have been seeking a technique to accomplish this switch, known as the “lipid trigger,” since the 1990s. Algae typically do not produce oil under normal conditions, but they do when they are stressed.

Algae are highly valued in biofuels research because of their high growth rate. “Whoever manages to break the trade-off between high growth of algae and high lipid content in the algae will be bringing a game changer to the table,” Sheehan told Energy Boom last December.

According to a VG Energy press release, the technique increased production of extractable lipid, or fat, by at least 300 percent when applied in the lab. The fat was stored outside the cell walls, making it easier to extract without first killing the algae. The technique also makes as much as 75 percent of the rest of the algae recyclable, further reducing costs.

In addition, this technique could also allow greater extraction of Omega-3 fats, also at much lower price than currently marketed processes.

Sheehan’s report details several ways that algal oil can be produced. VG Energy will study the techniques to try to put its new discovery into practice. The research is being supported by a $750,000 grant through the Texas Emerging Technology Fund, which was created by the Texas legislature in 2005.