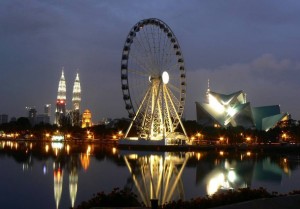 Malaysia said Monday it would consider cutting a diesel subsidy next year in a bid to make its biofuel industry more attractive after production of the alternative fuel virtually ground to a halt.

Malaysia has aims to become a global leader in biodiesel, but the once-vaunted industry has come to a standstill since March, when the government delayed a move to require oil companies to sell it alongside conventional fuels.

The plan was originally due to take effect in 2007 but will not now come into force until June 2011.

Malaysia Palm Oil Board (MPOB) figures show that the production of biodiesel, a mixture of diesel and five percent processed palm oil, dropped 99 percent from 12,640 tonnes in March to just 137 tonnes in July.

Plantations and Commodities Minister Bernard Dompok said the government was looking at cutting the subsidy for diesel, which currently costs 1.75 ringgit (0.58 dollars) per litre, to encourage the use of the biofuel.

“Because of the subsidy on diesel, it has somewhat distorted the price for biodiesel to be utilised,” Dompok told reporters at the sidelines of a palm oil conference.

“There is an element of increase in the pump price (of diesel) and this is what the government is looking at I think by 2011.”

He said the new rule on biofuel sales was on track for June next year, with the government providing funds to several oil firms, including Malaysia’s Petronas, to set up biofuel blending facilities.

The fall of oil prices from mid-2008 highs, when biofuels were a significantly cheaper alternative, has led many to stick to conventional fuel, raising questions over the future of biodiesel.

The rising price of Malaysia’s palm oil means the cost of manufacturing biofuels is high, and industry leaders are concerned they cannot cover their costs without government subsidy.

Malaysia has approved 56 licences for biodiesel output, which would create a production capacity of 6.8 million tonnes, but most plants have not been set up.

Malaysia aims to produce 17.8 million tonnes of palm oil this year with the country’s second largest palm oil firm, IOI, bullish that prices would hit the 3,000 ringgit per tonne benchmark “soon” due to tight supply.

“There are rains every day and we have a labour shortage (on the plantations),” IOI executive chairman Lee Shing Cheng said, adding that he believes the government is working to resolve the labour shortage.

Malaysia is the world’s second-largest exporter of palm oil after Indonesia, and the two countries account for 85 percent of global production.