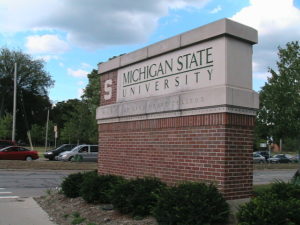 The U.S. Department of Agriculture awarded five-year grants for three projects focusing on various aspects of producing biofuels, which use renewable plant materials instead of petroleum.

“Americans who are now going to the gasoline pumps and dealing with sticker shock know that we need to find other ways of doing things in this country,” said Kathleen Merrigan, U.S. deputy secretary of Agriculture.

Most gasoline blends sold in the United States contain at least 10 percent of the biofuel ethanol. Nine billion gallons of biofuel were blended into transportation fuels in 2008, and the federal government is calling for 36 billion gallons by 2022.

Merrigan visited MSU on Wednesday to talk about the grants and tour research facilities at MBI International. MBI, based in Lansing and part of the MSU Foundation, helps prepare bio-based technologies and innovations for commercial use.

It’s a significant win for MSU, which will use the money to pay faculty and student researchers and fund other project costs, said Doug Gage, director of the MSU BioEconomy Network.

“We are very proud that our faculty are competing against the best in the country and wining awards,” he said.

MSU professors will lead the three research projects on campus that look at topics such as greenhouse gas emissions associated with biomass production and ways to use byproducts from the production of biofuel.

Biofuel research is moving away from food plants such as corn in favor of non-food crops or plant waste products.

“It would be inappropriate to place a crop into the landscape that would then cause a spillover effect on our current crops,” Landis said.

Landis will work with other MSU professors and students to conduct research on farms throughout southern Michigan.

“MSU is doing cutting-edge research here on biofuels,” Merrigan said. “They’ve made significant investments, they’re bringing together a variety of disciplines in their scientists to come together and sort of really deconstruct problems, figure out answers.”