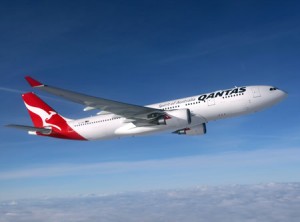 Quanta looking at waste to fuel its commercial airline fleet

QANTAS hopes to fuel its jets of the future with fuels produced from discarded food, reconstituted packaging and other household and manufacturing waste.

The airline will team with US-based Solena Fuels to investigate whether waste that passengers leave on its jets can be converted into biofuel.

The airline and Solena plan a year-long feasibility study that could result in a $300 million commercial jet biofuel plant being built in Sydney.

The aim of the joint-venture will aim to convert commercial waste to biofuel using an already approved process that converts coal and gas into commercial-grade aviation fuel.

A similar plant is being built by British Airways in London.

Due to come on line in 2014, the British Airways plant will convert up to 500,000 tonnes of waste a year into 73 million litres of green jet fuel, enough to power 2 per cent of BA’s Heathrow base.

Qantas has had a long-standing interest in biofuels and is a member of the global Sustainable Aviation Fuel Users Group.

Qantas spokeswoman Olivia Wirth said the airline was closely involved with other industry stakeholders in a “road map” study into the outlook for sustainable aviation fuel development in Australia.

“We are also in discussions with a number of companies about specific fuel-producing technologies,” Ms Wirth said.

“Under an agreement with Solena Fuels, we have committed to investigate the feasibility of a waste-based aviation fuel production plant in Australia.

“We expect to produce a business case for such a plant within 12 months. While we are still in the early stages of this project, the possibilities are exciting”.