Biofuel As Aircraft Fuel Actively Being Considered In Germany 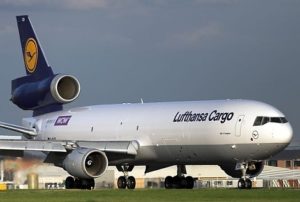 Biofuel As Aircraft Fuel Actively Being Considered In Germany

Airlines in Malaysia, which have been pioneering the development of biofuel, might be interested to know that German experts are “actively considering” the use of biofuel in aircraft.

Indeed, the subject of biofuel, for use in aircraft, has gained momentum.

This emerged at a crowded Cargo Climate Care Conference in Frankfurt on Tuesday organised by Lufthansa-Cargo, the world’s biggest cargo carrier, with the participation of internationally renowned experts on the subject.

Karl-Heinze Koepfle, Chairman of LH-Cargo said “environmental care” had always been “top priority” for the carrier.

“LH-Cargo did not back away from its responsibility to environment protection, even as we had the worst recession in post-war history, and did research and deploy lighter aircraft,” he added.

Joachim Buse, Vice President of Aviation Fuel at Deutsche Lufthansa, said the airline was conscious of the fact that biofuel, extracted from agricultural crops, could lead to food shortage and increased prices.

He referred to a plant cultivated in Mexico which could possibly be used as a source of fuel as it was neither consumed by humans or animals.

It’s use will not create any food shortage or affect consumption by humans.

“We do not want to become a competitor for the food sector,” said Buse, ading that the consumption of the plant would not create any food shortage.

Malaysia was involved in research projects to create fuel processed from palm fruit.

Buse also revealed that Lufthansa had applied to the German authorities to fly aircraft with biofuel.

“This would be the first time an aircraft would fly on the basis of biofuel.

“We will operate an A-123 aircraft on a six-month trial basis and thereafter review the situation.

“Six scientific institutes will be involved in closely monitoring the A123 flights with biofuel,” Buse said.

He also said the process of issuing a permit was in the “final stage”.

There is mounting public pressure on the airline to conserve the planet’s resources besides saving costs to develop alternative fuels.

Lufthansa-Cargo, which has been in the forefront of its energy-conservation drive, has also been encouraging young researchers and students at universities to work on alternative energy.

The carrier has also been encouraging young researchers and students to pursue their research on alternative forms of energy by offering them special awards for their contribution in environmental conservation.

At the Frankfurt conference, for instance, Lufthansa-Cargo gave out a “Young Reserchers” Award 2011 to a group of three engineering students from the Munich University for Applied Sciences.

Another award was given to an Austrian mechanical engineer for his work in the field of fatigue proof light-weight design, at the Montan University in Leoben, Austria.﻿