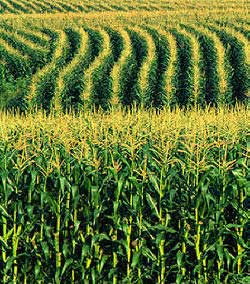 Corn advanced to the highest level since July 2008 and soybeans gained on speculation a crude oil rally may increase demand for alternative fuel. Wheat increased.

Oil soared to the highest price in more than two years as violence intensified in Libya, stoking concern supplies will be disrupted as tension escalates in the Middle East and North Africa. Crude for April delivery was up 9 percent from the Feb. 18 close at $97.84 a barrel. Higher prices may boost demand for corn and soybeans as a source of biofuel.

The higher costs of wheat, sugar and dairy products sent the United Nations’ World Food Price Index to an all-time high last month. The jump has contributed to revolts in Tunisia and Egypt, as well as other Arab nations.

Drought in north China, the world’s largest wheat grower, may cause significant losses to grain supplies this year, prompting increased imports and tightening global supplies, according to Weather Trends International.

The driest weather in at least 50 years in the nation’s wheat-growing region may cut 1 percent to 1.5 percent from the national average wheat yield, said Michael Ferrari, vice president for technology and research. It may take at least a month before the weather pattern shifts to normal rain, and three months to end the drought, Ferrari said in an interview.