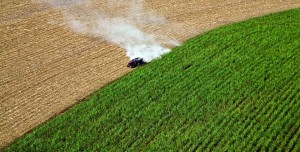 Researchers have engineered a strain of yeast that simultaneously consumes two sugars found in plants, a process that could make biofuel production faster, cheaper and more efficient.

The researchers tweaked Saccharomyces cerevisiae, a yeast commonly used to convert plant sugars to bioethanol, to create a strain that consumes glucose and xylose far more efficiently than anything currently used. The new strain reportedly converts cellobiose (a precursor of glucose) and xylose to ethanol as quickly as it can ferment either sugar alone.

UI food-science and human-nutrition professor Yong-Su Jin said the new strain is at least 20 percent more efficient at converting xylose to ethanol than other strains, which could bode well for the biofuel industry, as the government ramps up the amount of ethanol in our gasoline, and the federal Renewable Fuel Standard mandates increased production of biofuel.

The biofuel industry uses S. cerevisiae to convert plant sugars to bioethanol. Although S. cerevisiae is adept at utilizing glucose, it cannot use xylose, a major component of the lignocellulose found in stems and leaves. Those yeasts engineered to metabolize xylose do so slowly, adding to the time and cost of producing biofuel.

Jin and his colleagues wanted yeast that would quickly and efficiently consume both types of sugar at once, a process called co-fermentation. The research effort involved researchers from Illinois, the Lawrence Berkeley National Laboratory, the University of California at Berkeley, Seoul National University and BP. Yes, that BP.

The team built the faster, better strain by making several critical tweaks, according to the University of Illinois:

This approach, initially developed by co-corresponding author Jamie Cate at the Lawrence Berkeley National Laboratory and the University of California at Berkeley, eliminates the costly step of adding a cellobiose-degrading enzyme to the lignocellulose mixture before the yeast consumes it.

It has the added advantage of circumventing the yeast’s own preference for glucose. Because the glucose can now “sneak” into the yeast in the form of cellobiose, the glucose transporters can focus on drawing xylose into the cell instead. Cate worked with Jonathan Galazka, of UC Berkeley, to clone the transporter and enzyme used in the new strain.

The team then tackled the problems associated with xylose metabolism. The researchers inserted three genes into S. cerevisiae from a xylose-consuming yeast, Picchia stipitis.

Graduate student Soo Rin Kim at the University of Illinois identified a bottleneck in this metabolic pathway, however. By adjusting the relative production of these enzymes, the researchers eliminated the bottleneck and boosted the speed and efficiency of xylose metabolism in the new strain.

They also engineered an artificial “isoenzyme” that balanced the proportion of two important cofactors so that the accumulation of xylitol, a byproduct in the xylose assimilitary pathway, could be minimized. Finally, the team used “evolutionary engineering” to optimize the new strain’s ability to utilize xylose.

“We don’t have to do two separate fermentations,” he said. “We can do it all in one pot. And the yield is even higher than the industry standard. We are pretty sure that this research can be commercialized very soon.”

The research is presented in Proceedings of the National Academy of Sciences.