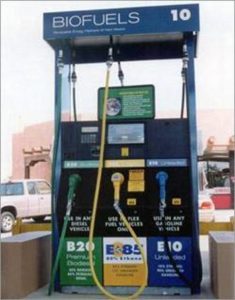 As of January 1, 2011, German drivers will have the option to fuel up their cars with new Super E10, a biofuel with higher ethanol content. The change is part of Germany’s plan to incrementally decrease its carbon emissions, with the goal of an 80 percent reduction by 2050. But for everyday German drivers, the cost of the new biofuel is still a relative unknown, and the subject of much speculation.

Previously, biofuel in Germany only had five percent ethanol content, whereas E10 packs a solid 10 percent ethanol, an increase that should prove more environmentally friendly.

The Federal Ministry for the Environment, Nature Conservation and Nuclear Safety (BMU) estimates that around 90 percent of existing German cars will be E10-compatible. Those vehicles unable to run on E10 can keep using the five percent variety until it is phased out in 2013.

E10 will be available from the more than 14,000 service stations throughout the country as of the first of the year.

According to the BMU, the higher ethanol gasoline will have a decreased impact on the environment in terms of carbon emissions and will reduce consumer reliance on diminishing oil reserves. The initiative is also designed to bring Germany into compliance with a European Commission directive seeking an EU-wide greenhouse gas emission savings of 60 percent from 2018 onwards.

The cost to the consumer is one contentious issue that is being batted around between the various groups interested in the project. As the cost of producing ethanol biofuel is higher than regular gasoline, the BMU expects the price at the pump to increase slightly as well.

“With the introduction of E10 come additional costs for the production of bioethanol and the maintenance of fuel quality,” the ministry said.

But the German Association for the Biofuel Industry contended that prices will not increase significantly.

“Ethanol will not be much more expensive than gasoline,” association president Claus Sauter told press agency dpa. “In addition, the petroleum industry itself is interested in selling E10, because it is legally obliged to bring biofuels to market.”

On the other side of the issue, the spokesman for BP Europe told Bonn’s General Anzeiger newspaper, “For drivers, the price will always be higher,” estimating an increased cost of 50 percent over normal petrol.

Another bone of contention is the actual environmental impact of the new biofuel due to something called indirect land use. This is essentially the consequence of changing the use of land in order to produce crops used in biofuel production. As more arable land is used to produce biofuel, the increased land clearance to grow food crops has the knock-on effect of higher carbon emissions.

Originally, the Commission had anticipated enacting its directive 98/70/EC, requiring member states to report on the greenhouse gas intensity of fuel and energy, starting on January 1, 2011.

According to the directive, suppliers are required to gradually reduce life cycle greenhouse gas emissions by 10 percent by the end of 2020 at the latest.

But shortly before the January kick-off date for the initiative, the European Commission published a report on indirect land use change related to biofuels. It found that the ramifications of indirect land use required more investigation before it could proceed with the directive.

“The potential effects of indirect land use need to be properly weighed in our biofuels policy. It is in our interest to investigate this seriously and ensure legislation that avoids negative side effects,” energy commissioner Guenther Oettinger said.

The result of its findings led the Commission to delay its biofuel directive until July of 2011.

In Germany, however, the BMU claims that many of the required elements for biofuel production are locally and sustainably grown.

Source and thanks dw-world.de