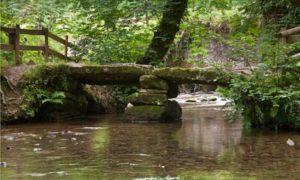 Cardinham Woods in Cornwall are managed by the Forestry Commission, but could be attractive to energy companies for use in biomass power plants, if privatisation plans go ahead.

Voters have a strong emotional attachment to woodlands. Leaked plans to sell state-owned woodlands managed by the Forestry Commission led to fears of a rise in Centre Parcs-style holiday villages, golf courses and adventure sites. The government quickly attempted to pacify the public.

Although refusing to confirm how much woodland would be sold, claiming such details would be considered as part of a public consultation, due to begin in January, Defra promised any new owners would be required to maintain biodiversity and public access. ‘Changes in ownership will not affect the public’s rights of access or the environmental protections that are already in place,’ it said. Defra decided to sell after being ordered to make 30 per cent savings on its annual budget of £2.9 billion by 2015 in last month’s Spending Review.

Control of the Forestry Commission in Scotland and Wales has been devolved to the regional assemblies, which means the UK government only has power over English woodlands. The English estate was valued at £761 million in the commission’s report and accounts for 2008-9. Attempting to downplay the sell-off, it says the Forestry Commission owns just 18 per cent of the woodland in England. While a further 12 per cent is owned by public bodies such as the Ministry of Defence and local councils, the rest is already in private hands. ‘A view has been put forward in the newspapers that private ownership of forests leads to felling and development, but the fact is, 70 per cent is already in private hands and it isn’t happening,’ argues a government spokesperson.

The government is understandably wary of upsetting voters on this issue. A sell-off of Forestry Commission lands was previously attempted by John Major’s government in the early 1990s but was abandoned after a public outcry. This time a sale is more likely to proceed, partly because the public’s right of access is now protected by the Countryside and Rights of Way Act of 2000. These rights remain in place whoever buys the land.

However, Mark Avery, conservation director at the RSPB, points out that the new owners may not be obliged to maintain car parks and stiles which enable public access. The pressure group will be pressing the government during the consultation to make sure access rights are fully protected: ‘We will be poring all over the details when they are published to ensure the safeguards are as strict as you can make them,’ says Avery. He is also encouraged by DEFRA’s rhetoric about maintaining public access and biodiversity: ‘They are making the right noises and organisations like ours will be trying to make sure that means something.’

Hilary Allison, policy director of the Woodland Trust, believes public support for lower government spending will make it harder to argue that forests should remain in state ownership. ‘There is a general desire to reduce size of government in every area of public life,’ she says. ‘There will be so many other areas where people will be concerned about spending cuts, like student loans, university fees and healthcare, that it will be more challenging to argue for the value of retaining state forests.’

The Trust, a charity owning 20,000 ha of woodland that is freely accessible to the public, is concerned that public access may not be guaranteed for around a fifth of Forestry Commission land in England because it is held under lease rather than freehold, so the Countryside Act may not apply. Allison adds that roughly half of privately owned woodland is barred to the public. ‘Estate owner

s tend to regard public access with suspicion, because of fears over vandalism, fires, dumping, or the land may be used for shooting,’ she says. ‘In addition, they may not want to shell out for the cost of maintaining footpaths, car parks and gates, or keeping trees safe.’

The Trust’s ‘Space for People‘ report found that only 38 per cent of all woodland in England is open to the public. DEFRA insists that a transfer to private ownership will not lead to forests being felled and the land built upon. Existing planning restrictions will remain in place, whoever owns the forest: ‘This speculation about forests being felled to make way for golf courses and holiday villages is just not realistic,’ says a Defra spokesman.

Allison believes private ownership can lead to development of woodland in some cases, despite planning restrictions. For example, although development is barred on any woodland that is designated a site of special scientific interest, other woods may not enjoy the same protection. ‘There is some wriggle room [for developers],’ she says. ‘We know of probably hundreds of cases where there are planning applications to build on woodland. It is not beyond the bounds of possibility, especially if the developer is persistent.’

The Trust is also concerned that an opportunity to replace conifers with native, deciduous trees on around 20,000 ha of Forestry Commission land may be lost if the land is sold. These conifers are now reaching maturity and are ready to be cut down as a timber crop. The commission has made various commitments to replace them with native trees but the process could be interrupted by a sale, the Trust believes. It is also disappointed that any proceeds from the sale are likely to go into Treasury coffers rather than invested in the creation of new woodlands.

Although Defra refuses to be drawn on details, it is widely believed that commercial forestry companies will bid for the commission’s timber-growing sites. Conifer plantations account for the vast majority ofForestry Commission sites in England – 144,000 hectares, compared with just 55,000 hectares of deciduous or broadleaf woodland.

The Confederation of Forest Industries (ConFor), which represents forest owners, harvesters and related trades, is worried that some will be snapped up by energy companies that simply want to burn the wood as a biofuel, alongside coal, which enables them to claim subsidies for green energy. Scottish & Southern Energy has already assembled a portfolio of 3,000 hectares of UK forests. ConFor is lobbying ministers to stop energy companies from buying up forests to burn in biomass-fired power stations and argues much more carbon can be saved by continuing to use wood as a construction material than by burning it, which also threatens industry jobs. ‘We have huge concerns about this,’ says Goodall.

ConFor wants politicians to ensure forests are sold to companies that continue to support the estimated 170,000 jobs in forestry and related trades. ‘We want to ensure that such sales are not made to large energy companies, which would simply burn available supplies of wood and, in the process, destroy businesses such as sawmills and panel board mills, that provide more green jobs and lock up carbon in wood products,’ says ConFor UK chief executive Stuart Goodall.

Mark Avery of the RSPB points out that conifer plantations are ‘pretty dull’ in terms of biodiversity and little would be lost by their transfer to the private sector. ‘Growing timber is a business, and we wouldn’t say there is a particular need for the state to be involved,’ he says. ‘However, we are concerned that places which are important for wildlife should either remain in public ownership, and be managed for the public good, or, they should have extremely watertight safeguards before they are disposed of.’

How to deal with so many owners?

The RSPB is concerned that biodiversity may be harder to maintain on the best woodland sites if the Forestry Commission is replaced by a patchwork of private owners. Avery explains that in parts of Dorset and the New Forest, for example, the RSPB has been successful in persuading the commission to leave parts of the forest floor as open land after tree felling, providing a specialist habitat for species such as sand lizards, adders, woodlarks and Dartford warblers.

‘If we can talk to a single entity like the Forestry Commission, organisations like us can get our views across and are likely to be listened to. If the land were owned by twenty different companies, it would be more difficult,’ says Avery. Defra says voluntary and not-for-profit organisations will be encouraged to bid for some forests: ‘Ministers are keen for local communities and environment groups to take on forests important to them in their area,’ says the spokesman. Allison at the Woodland Trust doubts whether this is realistic: ‘Lots of people will volunteer for things like working parties, but to acquire a chunk of land and to manage it is quite a big challenge,’ she says.

Despite such fears, the Coalition seems determined to push ahead with the sell-off. However, by refusing to say publicly just how much of the estate it wants to sell, the government has left itself room for a partial climbdown. Time will tell whether this will be necessary.

One comment on “How forest privatisation could attract biofuel energy companies”