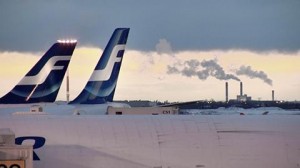 Finnair is set to become the first airline in the world to use fuel produced from renewable sources on regular flights. The airline aims to start fuelling its planes with biofuel next spring.

Finnair airplanes could soon be powered by lard or logging waste, as the airline moves to adopt a new biofuel. Such fuel, which is a mixture of fossil and biofuel produced from renewable sources, should pass certification by next spring. As soon as this happens, Finnair is prepared to use the new fuel on a significant proportion of its flights.

Expecting the new product to bring it international business, the Finnish company Neste Oil will start producing the fuel with bio-kerosene in Porvoo as well as in Rotterdam and Singapore. Up to now, there have been only half a dozen refineries in the world that produce such biofuel.

According to Neste Oil CEO Matti Leivonen, this is the first time that cutting edge Finnish technology will be used in commercial traffic.

Airlines have demanded that the new fuel should not contain palm oil, which has been linked to rain forest destruction. Finnair is especially interested in utilising logging waste from forests at home in Finland.

The new biofuels will also figure prominently in emissions trading, set to be implemented in the air industry in two years’ time.