Biofuel no benefit to the Military? 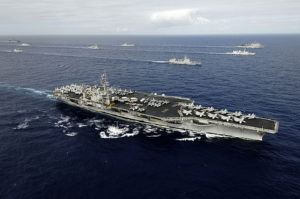 US Military to halt focus on renewable fuels?

Though the Defense Department has said using more renewable energy will reduce the need for fuel convoys in the battle zone, RAND questions biofuel’s role in that effort, saying that any alternative fuels — either with biofuel blends or coal-to-liquid technology — would still require those fuel convoys or compound logistical challenges on the front lines.

“In short, the military is best served by efforts directed at using energy more efficiently in weapon systems and at military installations,” it said.

The work assessed the current status of the alternative fuels market and concluded that the only fossil fuel substitutes that could be attainable in the foreseeable future would be those produced through the Fischer-Tropsch process, a method with a hefty carbon footprint that produces synthetic diesel from coal, natural gas or coal-biomass blends.

“Considering economics, technical readiness, greenhouse gas emissions and general environmental concerns, [Fischer-Tropsch] fuels derived from a mixture of coal and biomass represent the most promising approach to producing amounts of alternative fuels that can meet military, as well as appreciable levels of civilian, needs by 2030,” the report said.

Currently, no agency of the U.S. government has announced plans to promote early commercial use of such fuels though the Air Force has been working on certifying its aircraft to use the fuel. South Africa, Qatar and Malaysia have made strides with the process, and the report estimates that by next year global production will be more than 350,000 barrels per day.

In order for that coal-biomass fuel to be successful in the United States, the report said, it will be necessary to provide early backing of both that process and of carbon capture and sequestration processes which could limit the greenhouse gases from the process. James Bartis, the report’s lead author, said that his team was not recommending coal-derived fuels, but that RAND was laying out the available options.

With biofuels made from plant waste or animal fats, the amount of feedstock is limited and no more than about 25,000 barrels per day will be produced by 2020, the report said. Bartis said he did not think seed oil fuels would ever be available in large quantities since the land use needs to grow the feedstock would be too large — requiring 10 percent of U.S. croplands currently under cultivation to produce just 1 percent of the country’s fuel needs each day — and he questioned the greenhouse gas benefits of such fuels. Meanwhile, algae, he said, seems promising but the industry is still immature.

If DOD continues to finance alternative fuels research to benefit the country’s alternative fuel interests, the report called for a restructuring of DOD’s current R&D to be more integrated across the services and focus more on long-term processes — rather than proving the viability of individual feed stocks. It should also limit how many resources it puts toward testing and certifying biofuel blends like those derived from camelina and algae, it said.

“Demonstrating technical viability is easy; consider the history of photovoltaic power and fuel cells. But demonstrating affordable and environmentally sound production … is difficult,” the report said.

The Navy, which has been on the front lines of biofuel research, blasted the findings. Tom Hicks, deputy assistant secretary of energy for the Navy, said that the findings do not “square with what we have encountered or heard from industry.”

“We have been engaged with the biofuels industry. We know what they are capable of doing, and we are confident they will be able to deliver the fuels at the quantities and at the price point we need,” he said. The Navy is calling for 8 million barrels of biofuel per year by 2020, he said.

Ultimately, the best processes and feedstocks will rise to the surface, but Fischer-Tropsch won’t work for us, said Hicks. “We are going to continue on with what we’re doing. It’s the right thing to do for energy independence and energy security, and for us it’s about enhancing warfighter capabilities,” he said.

“Our main message to the Defense Department is if you want to use these fuels … don’t think you will get any military advantage,” Bartis said. There may be civilian benefits from DOD developing these fuels like reducing the world’s dependence on foreign oil, he said, but it will not help the country’s troops.

Personnel from the Navy, Air Force, and Army helped inform the report’s findings, according to RAND. Alan Roberts, who recently retired from serving as head of the Navy energy program, also served as a consultant on the report, it said. Hicks said that no one from the Navy’s uppermost “secretariat” level was consulted on the report, calling that a “critical oversight.”

The Pentagon has spent hundreds of millions of dollars on the development, testing and certification of alternative fuels, the report said.

Source and thanks NYtimes