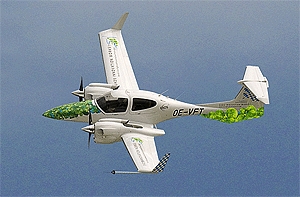 EADS demonstrated the flight of an aircraft powered by biofuel made from algae at the Farnborough Airshow yesterday.

One of the two Austro Engine AE300 engines of the EADS demonstrator Diamond Aircraft DA42 New Generation was powered by specially grown and refined algae biofuel. The other was fuelled by normal diesel.

According to EADS, the aircraft has, as of now, been only certified by European aviation officials to fly with one engine powered by biofuel.

Jean Botti, chief technical officer of EADS, said the use of algae biofuel made the aircraft 10 per cent more efficient and fuel consumption was 1.5 litres per hour lower when compared to conventional JET-A1 fuel.

‘Algaes have more energy content than the equivalent diesel fuel,’ he explained.

The tests performed on the engines showed that only minor adjustments had to be made to qualify the algae biofuel for demonstration flights. In this case, the nozzle for combustion needed to be turned down to prevent overheating.

Botti said this means algae biofuel could be used on newer aeroplanes or existing ones. ‘Basically it’s a plug-in solution,’ he added.

Algae is considered to be a promising potential feedstock for biofuels, as certain species of algae contain high amounts of oil. EADS is investigating microalgae, which reproduce rapidly and create at least 30 times more biomass per cultivation area than other alternative fuel sources such as rapeseed.

Microalgae can be grown relatively inexpensively in ponds and wastewater or in more controlled environments such as photobiosynthetic reactors, which are believed to deliver better quality and consistency.

The use of such biofuel is viewed by many as ‘carbon neutral’ because the carbon dioxide that is emitted from burning the fuel is less than the amount of CO2 the organisms absorb to grow.

‘For one ton of raw algae material you need 1.8 tons of CO2 to grow them,’ said Botti.

According to tests by EADS, the exhaust gas quality measurements indicate that biofuel from algae contains eight times less hydrocarbons than kerosene derived from crude oil. In addition, the aviation and defence giant claimed the nitrogen oxide and sulphur oxide emissions are also reduced.

Botti said the major challenge standing in the way of algae biofuel being used by the aviation industry is scaling up its production levels to industrial size and economy. This issue was clearly demonstrated, he added, by the extraordinary efforts EADS had to go through to find enough quality algae biofuel to perform tests and demonstration flights.

‘I had to go all around the world to find the best guys that could deliver a good quality product that we could refine,’ he said. ‘This is why we had to fly a little aeroplane. I couldn’t fly on a large Airbus aircraft with those algaes because I did not have enough quantity for all the testing and certification.’

EADS has been working over the past 18 months with partners towards a pilot project to develop the necessary industrial infrastructure. The project, led by EADS Innovation Works, is supported by the German government. It includes German scientific partner IGV and Austrian aviation companies Diamond Aircraft and Austro Engines. The algae oil for engine testing and flight demonstrations was delivered by Biocombustibles del Chubut in Argentina and refined into biofuel by German firm VTS Verfahrenstechnik Schwedt.

The use of algae biofuel on commercial aeroplanes will depend on whether it can pass European certification standards and this will require thousands of litres of the fuel, which are not yet available.

Botti is confident that if the aviation and energy sectors work together approximately 10 to 15 per cent of commercial airliners could be running on biofuel in 20 years, or possibly blended fuels in the nearer future.

‘I am convinced that once we start this snowball it is going to take off fast,’ he said.