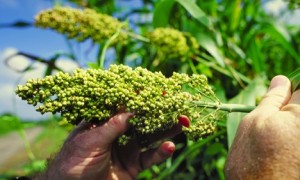 The author of the report, Ben Goff, found that using sorghum from a single-cropping system was more effective for the production of ethanol. Since most of the ethanol currently produced in the United States is derived from corn, Goff suggests that corn may not be able to meet the energy needs of the country. According to the study, only 15 to 25% of the energy requirements would be fulfilled using corn or starch-based ethanol; however, ethanol produced from cellulose could be more effective than previous biofuels.

International experts from government, academia and agriculture will gather for the International Workshop on Sorghum for Biofuels in Houston, Texas. Photo courtesy of Howard F. Schwartz, Colorado State University, Bugwood.orgGoff states that from a production standpoint, growing sorghum as a sole crop is more efficient for ethanol production, however, it remains to be seen whether the favorable long-term environmental benefits, such as reduced erosion potential, of the double-cropping systems merits the reduced total biomass production.

The author theorizes that these altered chemical compositions could be attributed to the different cropping systems.

Goff recommends that further research on double-cropping systems for ethanol production should focus on efforts to maximize production of sorghum, such as incorporating a winter crop that matures earlier in the season. This would allow planting of the sorghum closer to its optimal date and capitalize on its ability to produce greater and higher-quality biomass over a greater portion of the growing season.

This study was funded by the Iowa Energy Center and published in the November/December 2010 issue of Agronomy Journal from the American Society of Agronomy.