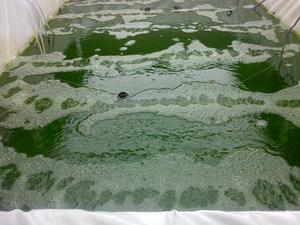 A team of researchers at the Rochester Institute of Technology in New York is using wastewater to cultivate algae for biodiesel production. The project, which has being ongoing for two years, ultimately aims to provide rural communities with a technology than can aid in wastewater treatment while providing the economic development opportunity of biodiesel production.

Jeff Lodge, an associate professor in RIT’s Department of Biological Science, is leading the project along with Eric Lannan, a graduate student enrolled in RIT’s mechanical engineering program. “Eric Lannan…came to me with this project,” Lodge said, noting that Lannan has some expertise in diesel engines and was interested in making algae-derived biodiesel. “Two years ago we started growing algae cultures in my lab, trying to figure out the best way to grow them,” Lodge continued.

The research has focused on three strains of algae the team sourced from New York-based Wards Natural Science, including Scenedesmus, Chlorella and Chlamyeomonas. “These are three algae that naturally accumulate lipids, especially if you starve them for nitrogen, which is an essential nutrient,” Lodge said. Nitrogen-rich wastewater media used to grow the algae is being sourced from the Irondequoit, N.Y-based Frank E. Van Lare Wastewater Treatment Plant. According to Lodge, the algae strains take up the nitrogen present in the wastewater quickly, rapidly depleting the media of the nutrient. “We can then run them for several days with limited nitrogen, and that’s when they start to accumulate the lipids,” he continued.

To date, Lodge said the lipid content of the algae has typically varied between 25 and 50 percent. The goal of the team is to push the average oil content up toward the 50 percent mark or higher.

Lodge and Lannan began producing algae on a lab-scale about two years ago, and have since scaled up the project. “We have essentially gone through and studied the nutritional requirements, light [requirements], and things like that, and scaled from about half a liter to a seven to 10 gallon tank,” Lodge said. “Just recently we have scaled up to a 60 to 100 gallon tank.”

That 100 gallon tank, which was built by Lannan, is currently housed at Environmental Energy Technologies, a local engineering company. According to Lodge, the tank is currently being used indoors to test various aspects of algae growth, including optimum light levels and temperature. Lipids extracted from the culture are being sent to Ontario, N.Y.-based Northern Biodiesel for conversion into fuel.

This spring, the 100 gallon tank will be moved outdoors, where further testing will be completed. By mid-summer Lodge estimates that algae cultivation will begin onsite at the Frank E. Van Lare Wastewater Treatment Plant using a mobile greenhouse. The goal is to scale production up to 1,000 gallons. If all goes well, Lodge said a larger demonstration-scale project could be developed in the future.