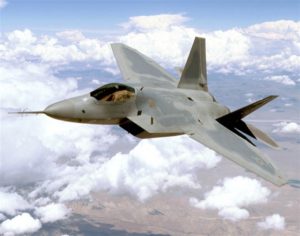 An F-22 Raptor successfully flew at supercruise March 18 on a 50/50 (E50)  fuel blend of conventional petroleum-based JP-8 and biofuel derived from camelina, a weed-like plant not used for food.

The overall test objective was to evaluate biofuel fuel blend suitability in the F-22 weapon system. Testing consisted of air starts, operability, and performance at different speeds and altitude throughout the flight envelope. The F-22 Raptor performed several maneuvers including a supercruise at 40,000 ft. reaching speeds of 1.5 Mach. Supercruise is supersonic flight without using the engine’s afterburner.

“The F-22 flew on Friday, March 18 and performed flawlessly on the biofuel blend citing no noticeable differences from traditional JP-8,” said Jeff Braun, director of the Alternative Fuels Certification Division, part of the Aeronautical Systems Center at Wright-Patterson Air Force Base, Ohio.

The overall flight was a success and another milestone completed for the Alternative Fuels Certification Division in support the Air Force’s 2016 acquisition goal to cost-competitively acquire 50 percent of the domestic aviation fuel requirement via alternative fuel blends in which the component is derived from domestic sources produced in a manner that is ‘greener’ than fuels produced from conventional petroleum.

The camelina-derived synthetic fuel falls into a class of hydro-processed blended biofuels known as hydrotreated renewable jet fuels, or “HRJs.” The HRJ fuel can be derived from a variety of plant oil and animal fat feedstocks.