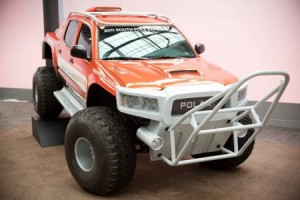 The truck is also equipped a solar cell system and a wind-powered generator, so should some components fail, communications power will still be possible. With 44″ wheels, 32 gears, protection bars, a crush-proof passenger cab, and a real-time GPS satellite tracking system, the Polar Performance Vehicle is preparing to take on some harsh