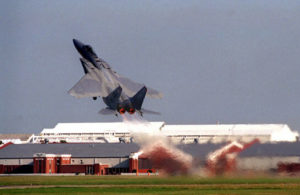 This is Pratt & Whitney’s second military engine to successfully complete ground and flight tests using biofuels. A C-17 Globemaster III, powered exclusively by four Pratt & Whitney F117 engines, completed testing in August. Similar tests are planned for the F119 in the near future.

“We are pleased with the performance of our military engines using alternate jet fuels during ground and flight tests,” said Bev Deachin, vice president, Military Programs and Customer Support, Pratt & Whitney. “These successful tests are in direct support of our U.S. Air Force customer’s goal to acquire and use alternate jet fuel sources for its fleet.”

The flight tests blended Hydrotreated Renewable Jet (HRJ), an eco-friendly alternative from sources including animal fats or plant extracts such as camelina, with traditional JP-8 jet fuel. Ground testing also included a blend of JP-8 jet fuel, HRJ, and a synthetic fuel made from coal.

Pratt & Whitney military engines include the F135 for the F-35 Lightning II, the F119 for the F-22 Raptor, the F100 family that powers the F-15 and F-16, the F117 for the C-17 Globemaster III, the J52 for the EA-6B Prowler, the TF33 powering AWACS, Joint STARS, B-52, and KC-135 aircraft, and the TF30 for the F-111. In addition, Pratt & Whitney offers a global network of Maintenance Repair and Overhaul and Military Aftermarket Services focused on maintaining engine readiness for our customers.

Pratt & Whitney is a world leader in the design, manufacture and service of aircraft engines, space propulsion systems and industrial gas turbines. United Technologies, based in Hartford, Conn., is a diversified company providing high technology products and services to the global aerospace and building industries.

This press release contains forward-looking statements concerning future business opportunities and operational engine performance. Actual results may differ materially from those projected as a result of certain risks and uncertainties, including but not limited to changes in funding related to F100, F117 and F119 engines, changes in government procurement priorities and practices or in the number of aircraft to be built; challenges in the design, development, production and support of advanced technologies; as well as other risks and uncertainties, including but not limited to those detailed from time to time in United Technologies Corp.’s Securities and Exchange Commission filings.