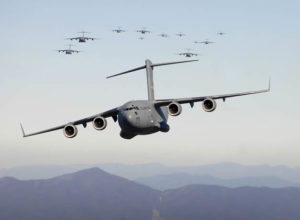 The U.S. military is looking to go green across all branches. The USAF has announced that it has certified its first aircraft for use of biofuel. The first aircraft is the C-17 Globemaster III and it has been certified for unlimited usage of hydroprocessed blended bio fuels known as hydrotreated renewable jet (HRJ) fuels.

The aircraft can operate on volumetric blends of up to 50 HRJ fuel with 50% JP-8 jet fuel, which jet aircraft traditionally run on. The aircraft can also operate on 25% HRJ, 25% synthetic paraffinic kerosene fuel, and 50% JP-8.
“We’re very proud of this certification,” said Terry Yonkers, the assistant secretary of the Air Force for installations, environment and logistics. “By using a ‘pathfinder’ approach, we’ve taken the success of our processes developed in our previous alternative fuel certifications work and learned how to efficiently streamline our HRJ certification efforts, while guaranteeing the fuel blend will work without notable difference to the pilots.”
The certification of the aircraft is part of an ongoing program by the Air Force to certify and test biofuels from non-petroleum sources. Yonkers added that the biofuels also burn cleaner than traditional jet fuels with no compounds like sulfur.
It’s also important to note that the blended biofuels require no changes to the aircraft at all to use. Air Force alternative fuel certification office chief Jeff Braun said, “We expect to conclude HRJ flight testing within the next 12 months, supporting fleetwide HRJ certification within the next 22 months.” He continued, “When blended as we’ve done, this is a potential drop-in solution for jet fuel for our aircraft, requiring no modification to systems or special handling or monitoring.”
Braun also stated that the blended fuel doesn’t affect the performance of the aircraft, meaning there are no significant differences in engine stability, thrust response, or steady-state performance when burning the biofuel mix compared to straight JP-8.
The Navy has a biofuel program of its own that has been condemned by some researchers.
Tagged with: C-17 Globemaster III, HRJ, hydrotreated renewable jet, Military biofuels, USAF, USAF Biofuel
Posted in Biofuel for Military, Biofuel legislation, News