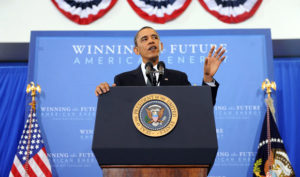 President Obama outlined a plan to reduce oil imports to the United States by one-third over the next 10 years by relying on further oil and gas drilling at home, development of biofuels and greater fuel efficiency in new cars and trucks.

With gas prices climbing because of unrest in the Middle East, the White House seemed to be responding to Republicans who have been complaining loudly for two months about the pain high fuel prices are bringing average Americans.

The GOP has focused on opening more domestic territory to oil and gas drilling, projects that would only begin delivering fossil fuels several years from now. In his speech before students at Georgetown University, Obama agreed that more domestic oil and gas production was a must, though he said that companies needed to develop the millions of acres they’ve already purchased in federal lease sales over the years before any new territories would be opened.

Obama sketched a picture of future imports that would rely more on producers — and allies — in the Western hemisphere, like Canada, Mexico and Brazil. Canada and Mexico are already major exporters to the United States. Brazil, which the president visited recently, is on the verge of developing major new oil and gas reserves.

Implicit in the speech was the U.S. desire to lessen its dependence on the autocracies of the Middle East, which account for a major share of global oil production and some of which are facing pressure from their citizens for more democratic reforms.

Successive administrations since President Nixon’s have issued similar calls for energy independence — or at least reduced dependence. But as Obama himself acknowledged, those plans have gone nowhere, and the U.S. imports a greater percentage of its daily oil consumption now than it did 40 years ago.

Moreover, the president faces a toxic political climate where the chances of bipartisan cooperation remain terribly remote. As a result, the administration may have to rely on executive orders to carry out some of its plans. In one realm, increased fuel efficiency, the federal government has worked with car companies and California to boost gas mileage in new cars after decades of congressional inaction on the issue.

Thanks and source LA Times