Laila Padi `Waste’ Found To Have Great Potential As Biofuel 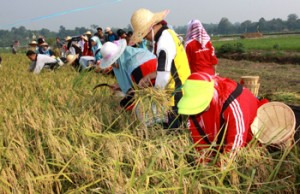 Laila Padi `Waste' Found To Have Great Potential As Biofuel

Brunei-Muara – Laila, the rice variety heralded as the answer to Brunei’s food self-sufficiency woes, might also fuel the Sultanate’s cars in the future as an efficient and more environment-friendly biofuel. This is the finding of a post-graduate student of Universiti Brunei Darussalam (UBD) researching the feasibility of converting byproducts of the national rice into biodiesel.

Once Laila is harvested and milled, the remaining “waste” products of husks, straws and bran are either thrown away, burnt or simply left in the padi fields due to their lack of commercial value. However, PhD student Prabitha Vinodh Kumar believes these so-called waste products can be converted into energy-efficient and eco-friendly biodiesel, which is diesel fuel derived from either vegetable oil or animal fat. As part of her on-going work for her doctorate, Kumar told The Brunei Times yesterday that she has already managed to produce near pure biodiesel from bran oil extracted from the bran of Laila padi.

“The biodiesel was almost B100,” she said, explaining that the B number represented the percentage purity of the biodiesel, with a higher percentage referring to higher quality biodiesels.

Kumar has also made use of the facilities at Brunei LNG to ensure the quality assessment of the biodiesel produced for qualities such as viscosity, acid value and copper corrosion, according to the standards of the American Society for Testing Materials (ASTM).

Biodiesel is produced by either the transesterfication (whereby the glycerin is separated from the fat) of vegetable oil with methanol in the presence of an alkali or strong acid that acts as the catalyst, as Kumar has done with the bran oil, or synthesised from bulk plant materials such as sugar and starch.

The PhD student plans to continue her research, which she embarked upon about a year ago, just months after the Laila padi variety was revealed and inaugurated as the preferred national rice variety, by carrying out work on converting Laila husks and straws into biodiesel.

Using bacteria imported from the US, the name of which Was not disclosed to the media to protect the student’s work, Kumar faces the task of “cloning two bacterium together for fermentation of biodiesel from husks and straws”.

She expects that the study will take a further two to three years to complete, but she remarked yesterday, “so far, so good”.

In her presentation during UBD’s inaugural Graduate Science Student Research Conference at the university’s chancellor hall, Kumar said that Brunei had 17 years’ worth of crude oil reserve and 30 years of natural gas reserves, citing statistics of a study carried out this year by the country’s think-tank, the Centre for Strategic and Policy Studies.

Among the advantages of adopting biodiesel in the Sultanate included the alternative fuel’s ecofriendly qualities.

“The amount of pollutant emitted by biodiesel is comparatively much less compared with normal diesel,” she said.

Kumar also pointed out that biodiesel did not require car owners to modify their cars. “Other biofuels like bio-ethanol and biogas need modifications. But if the biodiesel you produce is B100, there is no need for engine modification. It can be directly used in the car or any other vehicle,” she said.

However for mass production of the cheaper diesel alternative, Kumar anticipated it would require “a lot of funds” as the mass conversion bran oil into biodiesel would need a “big, plant”, while the cloning of bacterium for the fermentation of the husks and straws would be very costly.

Kumar also highlighted the potential of the applicability of the conversion process to rice varieties other than Laila.

His Majesty the Sultan and Yang Di-Pertuan of Brunei Darussalam and members of the royal family personally planted Laila seedlings in April 2009, to mark the start of an ambitious government-driven initiative to substantially increase Brunei self-sufficiency in rice production from 3.12 per cent to 60 per cent by 2015.