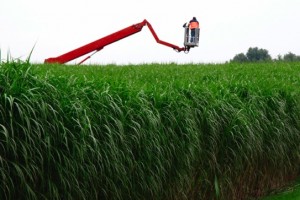 In the minds of many, Miscanthus x giganteus is the forerunner in the race of viable feedstock options for lignocellulosic bioenergy production. But researchers believe “putting all their eggs in one basket” could be a big mistake. Scientists at the University of Illinois recently reported the first natural occurrence in several decades of Miscanthus hybrid plants in Japan.

“If M. x giganteus is the only variety available, there are certainly risks involved such as diseases or pests causing widespread establishment problems or yield losses,” said Ryan Stewart, assistant professor of horticulture in the Department of Crop Sciences at the University of Illinois. “We are trying to find Miscanthus hybrids to increase our options. In doing so, it’s a way to hedge our bets.”

M. x giganteusis a sterile triploid (three sets of chromosomes) formed by a natural cross of M. sacchariflorus and M. sinensis. Because it’s sterile, it can only be propagated by vegetative division, which is somewhat more difficult than propagating by seed, Stewart said.

“Because it’s a sterile clone, it’s more or less a dead-end for plant breeders because it can’t be improved through plant breeding,” he said.

Stewart and his team investigated overlapping populations of tetraploid M. sacchariflorus and diploid M. sinensis in Japan in hopes of finding triploid hybrid plants that may be similar in productivity to M. x giganteus. However, finding this occurrence out in the wild is a rare event, he said.

“In Japan, even when two plant species are adjacent to one another, they may have very different flowering times, meaning the likelihood of finding a hybrid is very low,” Stewart added.

But Stewart knew that there were certain areas in Japan where M. sacchariflorus and M. sinensis sat side by side and had overlapping flowering times. So, with the help of his colleagues, Aya Nishiwaki of the University of Miyazaki and Toshihiko Yamada of Hokkaido University, they set out to search for these rare Miscanthus hybrids.

Last year, Nishiwaki was surprised to find a M. sacchariflorus plant, which was adjacent to some M. sinensis plants, with heavy seed set. M. sacchariflorus in Japan normally spreads vegetatively rather than through seed. Nishiwaki collected this seed, grew it out, and then used flow cytometry to determine the genome size of each of plants. Genome size can be used to detect hybridization events. In analyzing several seeds, their research revealed three triploid plants, which, based on some preliminary molecular analysis, were confirmed to be hybrids.

Researchers hope these new triploid plants will express phenotypic traits similar to that of the high-yielding M. x giganteus. But if they don’t, Stewart said they can still serve as sources of genetic variation that might express resistance to recently identified diseases and pests in the M. x giganteus.

M. x giganteus, the first known natural Miscanthus hybrid, was originally found in Japan and then made its way to Europe where it was initially used as an ornamental grass for estates or large gardens, Stewart said. It’s a highly productive grass that’s cold-hardy, notably for plants that use C4 photosynthesis, which are mostly found in the subtropics and tropics.

It is a popular candidate for bioenergy production because it can grow up to 15 feet tall, creating more biomass than other varieties of Miscanthus.

Stewart and his team have received funding to continue searching for hybrids and to build up a diverse collection of plants of several native Miscanthus species throughout Japan. This collection will serve as a resource for the Energy Biosciences Institute located in the Institute for Genomic Biology at the U of I. Future research will also address the phylogenetic relationship of these hybrids with other Miscanthus taxa, and also their agronomic potential relative to the commonly cultivated M. x giganteus.

Stewart’s research was published in the American Journal of Botany. Researchers included Aya Nishiwaki, Shotaro Kuwabara, Hiroya Matuura, Ryo Akashi, Sachi Yamaguchi and Genki Ishigaki of the University of Miyazaki; Aki Mizuguti of the National Institute of Agro-Environmental Sciences; Yo Toma, Tomomi Miyashita and Toshihiko Yamada of Hokkaido University; and Lane Rayburn and Ryan Stewart of the U of I.