Road Trip from Australia to Norway, running only on Biofuel made on route 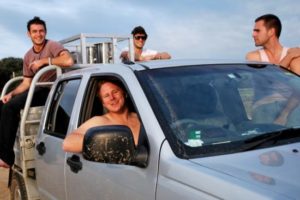 The Green Way Up!

Four Aussie men are preparing to make an epic road trip that will see them drive from their home inAustralia all the way to Norway. That, in and of itself, should make for quite an adventure, but they’ll also make the journey without stopping at a single gas station along the way. Instead, they’ll use biodiesel to power their vehicle and they’ll gas up by collecting cooking oil and animal fat from restaurants and pubs, which they’ll convert into fuel instead.

The journey has been labeled The Green Way Up and it will get underway in March. The drive will start in Hobart, Australia, the southernmost point on that continent and will end more than 28,000 miles later in the northernmost part of Norway. Along the way, the team will pass through 30 different countries, spotlighting the use of alternative fuels on a local level along the way.

In fact, the focus of the entire trip is to bring the use of alternative fuels to the attention of the general public, placing an emphasis on their importance to the environment and the future of energy for the planet. The team is so committed to using biodiesel for instance, that they’ve built their own special processor to create the fuel they’ll use along the way, and their putting the final touches on a biodiesel-powered boat that will carry them from Darwin, Australia to Singapore, with stops on the islands in East Timor, Indonesia and Malaysia along as well.

To find out more about this expedition, visit the official website