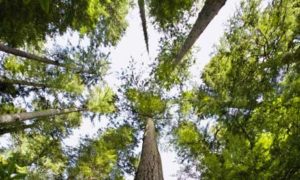 Researchers at the Department of Energy’s BioEnergy Science Center may have discovered some clues that could lead to poplar trees as the next candidate for biofuels. The research is being led by Charles Wyman of the Bourns College of Engineering’s Center for Environmental Research and Technology at the University of California Riverside who is joined by teams from Oak Ridge National Laboratory and the National Renewable Energy Laboratory. They published their findings in the Proceedings of the National Academy of Sciences, “Lignin content in natural Populus variants affects sugar release.”

Basically, the team is looking for traits in poplar trees that will lead to better sugar release. The lignin found in the plant’s cells have been a major challenge to overcome in biofuel production because it must be converted to sugar for production; yet, its strong sugar bonds interfere with access to the carbohydrates, and thus access to the sugar.

Wyman explained, “The real driver for bioenergy is how to get sugar as cheaply as possible from these recalcitrant materials. We’re looking for clues as to which traits in these poplar materials will lead to better sugar release.”

The BESC researchers were able to quickly analyze volumes of poplar core samples through the use of a high-throughput screening method. The goal was to better understand the chemical factors that drive sugar yields. The work resulted in finding a correlation between one plant trait, the syringyl/guaiacyl (S/G) ratio, which are the building blocks of lignin, and increased yields.

“The conventional wisdom is that high lignin contents are bad for sugar release,” said lead author Michael Studer. “We unexpectedly found that this statement is only valid for low S/G ratios, while at high S/G ratios lignin does not negatively influence yields. However, replacement of carbohydrates with lignin reduces the maximum possible sugar release. Another interesting result was that the samples with the highest sugar release belonged to the group with average S/G ratios and lignin contents. This finding points to a need for deeper understanding of cell wall structure before plants can be rationally engineered for efficient biofuels production.”

During the project, the research team was able able to pinpoint certain popular samples that produced remarkably high sugar yields without pretreatment – a typical prerequisite in biomass to biofuel production. This could help to reduce the costs of production. The team believes that their research may lead the way for poplar cultivars to be grown for commercial testing and propagation and ultimately for biofuel production.