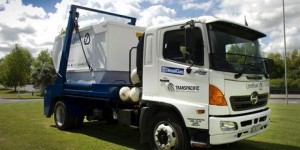 A waste truck which is fuelled by what you threw out last week has begun its rounds.

The truck, launched in Rodney yesterday by Auckland Mayor Len Brown, is the result of the first successful New Zealand project to turn landfill gas into a transport fuel.

Its creators say the truck’s performance is exactly the same as its diesel-powered equivalent, but it is quieter and has far fewer emissions.

The founder of the project, National Institute of Water and Atmospheric Research engineer Stephan Heubeck, said the “sky was the limit” when it came to capturing the latent fuel in waste dumps.

He has a vision of 5 per cent of Auckland’s transport being run on waste.

For a start, waste company Transpacific hopes to run its entire fleet on the biogas. Diesel trucks can be converted to a dual-fuel system for around $20,000.

Mr Heubeck said that cost would be earned back within a year.

The biogas is a mixture of carbon dioxide and methane which is produced when food scraps, wood and garden waste breaks down. The captured gas is then “scrubbed” with water to remove the carbon dioxide and create a clean, dry, biomethane fuel.

It ticks many of the boxes for a sustainable fuel – its source is cheap and available in huge quantities, it is not imported, and it contributes minimally towards climate change.

However, its application is more difficult. The producer of the gas needs to be relatively close to the user, so that the waste product does not need to be transported.

In the newly launched project, the Transpacific rubbish trucks are based at the same plant as the producer, Redvale Energy Park.

“It needs the right setting to work,” said Mr Heubeck.

“If you want to adopt it more widely, you will have situations where supply is greater than demand. So you need to commit to [renewable energy] for the long term so the structures can be put in place.”

Transpacific managing director Tom Nickels said most people considered biogas to be a harmful greenhouse gas but it was a valuable resource if managed correctly. As well as a transport fuel, the biogas could be also used for heating or to power homes.

The project is a joint venture between Transpacific, Greenlane Biogas, Dieselgas International and the National Institute of Water and Atmospheric Research (Niwa).