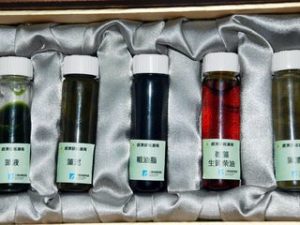 A Taiwanese research institute unveiled a Taiwan-developed technology for producing biofuel from microalgae, as part of efforts to target the growing environmentally friendly renewable energy industry.

The Industrial Technology Research Institute (ITRI) , which developed the technology, showed off the process of turning microalgae into biodiesel at the four-day Taipei International Invention Show and Technomart exhibition organized by the Taiwan External Trade Development Council and scheduled to end the following day.

Microalgae, which has extraordinary potential for cultivation as an energy crop, consumes large quantities of carbon dioxide and produces oxygen through photosynthesis.

During the process of consuming carbon dioxide, microalgae turns carbon dioxide into materials containing oil. The ITRI uses these materials to produce crude lipids that can then be converted into biodiesel. According to the ITRI, one gram of algae will produce 0.5 grams of lipids.

“Taiwan is encircled by the ocean, which makes it very convenient for obtaining microalgae to produce biodiesel, ” said Lin Yun-hui, a manager of the ITRI’s biofuel laboratory.

Lin said a liter of ocean water contains 1 gram of microalgae, which can be multiplied to about 5 grams after a week of cultivation.

“However, we have invented multi-layer filters that are able to boost the density of the microalgae in ocean water and extract about 120-150 grams from a single liter of ocean water,” Lin said.

However, Lin noted that production costs of microalgae biodiesel are high and said it remains to be seen when such fuel will be commercially viable.

The ITRI’s microalgal biofuel production technology development has been financially sponsored by the Bureau of Energy under the Ministry of Economic Affairs in a four-year project that started in 2009 and will cost a total of NT$240 million (US$7.67 million). (By Wei Shu and Frances Huang) ENDITEM/J