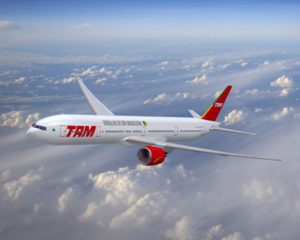 More aviation biofuel milestones were passed yesterday as TAM Airlines together with Airbus conducted Latin America’s first jatropha-based fuel flight, which also represented the first Airbus airliner to fly with a crop-based biofuel blend. Previous Airbus alternative fuel flights have been powered by gas-to-liquid (GTL) blends. Fuel for the TAM A320 flight was a 50% blend of locally-sourced Brazilian jatropha-based bio-kerosene and conventional aviation kerosene that had been processed by Honeywell’s UOP. Just one of the two CFM56 engines was powered using the biofuel. Airbus estimates that sustainable biofuels could supply some 30% of commercial aviation as early as 2030. In May, 10 Brazilian organizations, including TAM and three other airlines, formed the Brazilian Alliance for Aviation Biofuels to promote biofuel initiatives in the country.

The 45-minute flight took off from and returned to Rio de Janeiro’s Galeão Antonio Carlos Jobim International airport and had 20 TAM and Airbus personnel on board. The technical flight was approved by Airbus, engine provider CFM International, and was authorized by aviation authorities in Europe (the European Aviation Safety Agency – EASA) and Brazil (National Civil Aviation Agency – ANAC).

“Airbus and TAM have taken an important step towards establishing an aviation biofuel solution that is both commercially viable and sustainable, with positive impact on the environment,” said Airbus’ President and CEO, Tom Enders. “This flight serves as evidence of the aviation industry’s commitment to advance on its self-imposed CO2 reduction targets: carbon neutral growth from 2020, and working towards a 50% net CO2 reduction by 2050.”

Commented Libano Barroso, President of TAM Airlines: “This experimental flight materializes TAM’s participation in a vast project to develop a production chain for renewable biofuel, with the purpose of creating a Brazilian platform for sustainable aviation bio-kerosene.”

Airbus quoted studies that show the use of aviation biofuels derived from jatropha could reduce the sector’s overall carbon footprint by up to 80% compared with conventional petroleum-based jet kerosene.

In February 2008, an Airbus A380 aircraft completed the first ever flight by a commercial aircraft using synthetic GTL jet fuel and in October 2009, Airbus and Qatar Airways undertook a commercial passenger flight between London and Doha of an Airbus A340-600 with all four engines powered by a GTL blend.

Synthetic jet fuels have been approved in 50-50 blends for commercial airline service use by fuel certification body ASTM International but such approval is still awaited for biofuel blends such as the fuel used on the TAM flight. This is anticipated to be forthcoming within the next few months, paving the way for their introduction into normal flight operations.

The Brazilian Alliance for Aviation Biofuels (ABRABA) initiative includes TAM and three other airlines: Azul, GOL and TRIP, as well as Brazilian aircraft manufacturer Embraer and the Brazilian Aerospace Industry Association (AIAB). Representing the biofuels industry are producers and developers of biomass sources such as jatropha, sugarcane and algae. The objective of the alliance is to promote public and private initiatives that seek to develop and certify sustainable biofuels for aviation.

Azul is said to be planning a demonstration flight in the first half of 2012 using a 50% blend of sugarcane-derived biojet fuel on a GE CF34-10E-powered Embraer 190 aircraft.

TAM and Airbus said they both supported the study and assessment of the sustainability and economic viability of implementing the bio-kerosene value chain in Brazil.