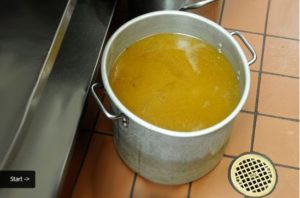 It’s almost like a blast from the past. We got somewhat used to stories of people stealing waste grease from outside restaurants back in 2008 when gas was costing four-plus dollars a gallon. Whether because today’s national average of $2.70 is still to high for some people or because the poor economy is encouraging people to do illegal things, grease thefts are on the rise out there.

The National Renderers Association, which takes the used cooking oil and turns it into biofuel, is currently conducting a survey to discover just how much grease is being stolen these days. Tom Cook, the NRA president, told USA Today that:

Virtually all of our members who are in the business of picking up used cooking oils are experiencing grease theft to some degree or another, in some cases, pretty significantly.


What is the waste worth? Around $1.90 a gallon, apparently, and those darn “grease rustlers” are, in some cases, making off with 700 gallons at a time. Big producers can lose even more. USA Today talked to the “animal and bakery byproduct recycling company” Griffin Industries and discovered that it “conservatively estimates” weekly thefts at around a million pounds. That’s a lot of deep fry.