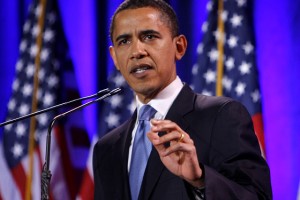 Obama shows his support for biofuel

Calling it “our generation’s Sputnik time,” U.S. President Barack Obama delivered a request during his State of the Union speech for Congress to continue to invest in biofuels and renewable energy technology. “Two years ago, I said that we needed to reach of a level of research and development we haven’t seen since the height of the Space Race,” he said. “And in a few weeks, I will be a sending a budget to Congress that helps us meet that goal. We’ll invest in biomedical research, information technology, and especially clean energy technology.”

Offering a hint as to his strategy to further fund biofuels technology, Obama suggested that Congress should eliminate subsidies for oil companies. “Instead of subsidizing yesterday’s energy, let’s invest in tomorrow’s,” he said. His declaration was met with applause from Congressional members, but the swift response from the petroleum industry indicates passing legislation to end oil subsidies will be a hard fought battle. American Petroleum Institute President and CEO Jack Gerard called Obama’s speech a missed opportunity and countered Obama’s claim that investing in biofuels and clean energy will create new jobs. “The oil and natural gas industry is a key driver of new jobs and economic prosperity,” Gerard stated. “Producing more oil and gas at home, which most Americans want, could create hundreds of thousands of jobs, reduce our deficit by billions, and enhance our energy security … The oil and natural gas industry provides over 60 percent of America’s energy, and it will continue to be the energy leader for decades to come. We need to produce U.S. oil and natural gas resources. This means getting back to work in the Gulf of Mexico, access in Alaska, and opening up the Atlantic and Pacific coastal areas to exploration. This is an issue the President and the new Congress should address.”

Renewable Fuels Association President Bob Dinneen pointed out that the domestic ethanol industry already supports approximately 400,000 jobs and “we have only begun to scratch the surface” on the country’s potential for ethanol production. “The potential of domestic ethanol production to meet the challenges facing this nation is great and can be unleashed through sound, responsible public policies,” he said. “American ethanol producers stand ready to work with President Obama, his administration and this Congress to implement thoughtful policies that are sensitive to fiscal concerns yet continue to foster the kind of innovation that has made this nation the leader in renewable fuel technologies.”

Already this year, the Obama Administration has taken steps to further support biofuels growth in the U.S. The U.S. EPA recently expanded its approval for E15 use in vehicles to include model years 2001 to 2006. The USDA awarded $405 million in loan guarantees to cellulosic ethanol producers on Jan. 20 and additional guarantee approvals are expected soon. The USDA also followed through on a late-2010 declaration to provide assistance to advanced biofuel producers, authorizing more than $10 million to be issued to advanced biofuel producers in 33 states. Funding for both the loan guarantees and the producer payments was made possible through the 2008 Farm Bill.

Source and thanks to ethanolproducer.com