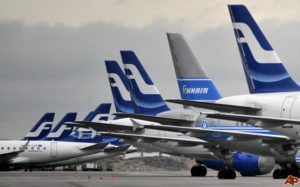 The Finnish state-owned airline Finnair has reversed an earlier decision to start using biofuel in some of its commercial flights this year.
Finnair was to have started to use kerosene produced by Neste Oil from biological sources as soon as certification is implemented. Now the airline is going back on its decision.
“The price of the fuel and its sustainability measured against all criteria is not at the level that we would have gone into it at this point. There are various research projects in progress, and it is in our interest to use a fuel produced from local raw materials”, says Kati Ihamäki, environmental director of Finnair.

One possible local source of biofuel would be the upcoming plant in Varkaus where Neste is studying the use of wood chips.
“An ideal situation would be for us to get biological kerosene produced from local raw materials, because there is no sense in hauling raw material from the other side of the world.”

Finnair is involved in a project that is taking place near London, where the use of algae as biofuel is being studied. That project is set to continue through 2014.
“We would have wanted to start commercial flights with biofuel now, but products that are currently available have not met our sustainability criteria”, Ihamäki says.

Biolofuels used by Neste come from certified sources, but they suffer from the same problems as other oil plants: although the plants that are used in fuel production are grown in areas where nothing else is cultivated, there is the danger that plantations might start encroaching on land that is used for food production.
Environmental organisations have taken a negative view of the use of fuel made out of palm oil, saying that rain forest are destroyed to make way for oil palm plantations. There is also overall criticism of the use of food oil as a transport fuel.

Price is also a consideration. Biological kerosene is significantly more expensive than fossil fuel, and fuel costs account for a quarter of Finnair’s overall operating costs.
“The problem is that products made of good raw materials and at a suitable price are not currently available”, Kati Ihamäki says.
She insists that pressure from environmental organisations had nothing to do with the decision.